Documentary Photography – Hands Up For Haiti

The purpose of my trip to Haiti was to document the great work Hands Up for Haiti does.  The volunteers for HUFH spent the week hosting clinics for the children of Cap-Haitien and the neighboring villages.  They hosted five days of pediatric medical clinics.  And while the trip was not structured this way, each day of clinic got a bit more intense.  Our first two days were spent at Open Door Ministries, which also hosted us overnight for the first four nights of our trip.  Open Door is a faith based organization which includes a medical clinic, a school, church and an orphanage.  The children who visited Open Door were the most healthy of all the children we saw.  This is a testament to the fact that Hands Up for Haiti has been holding clinics there for five years.  It was great to see the progress they had made. 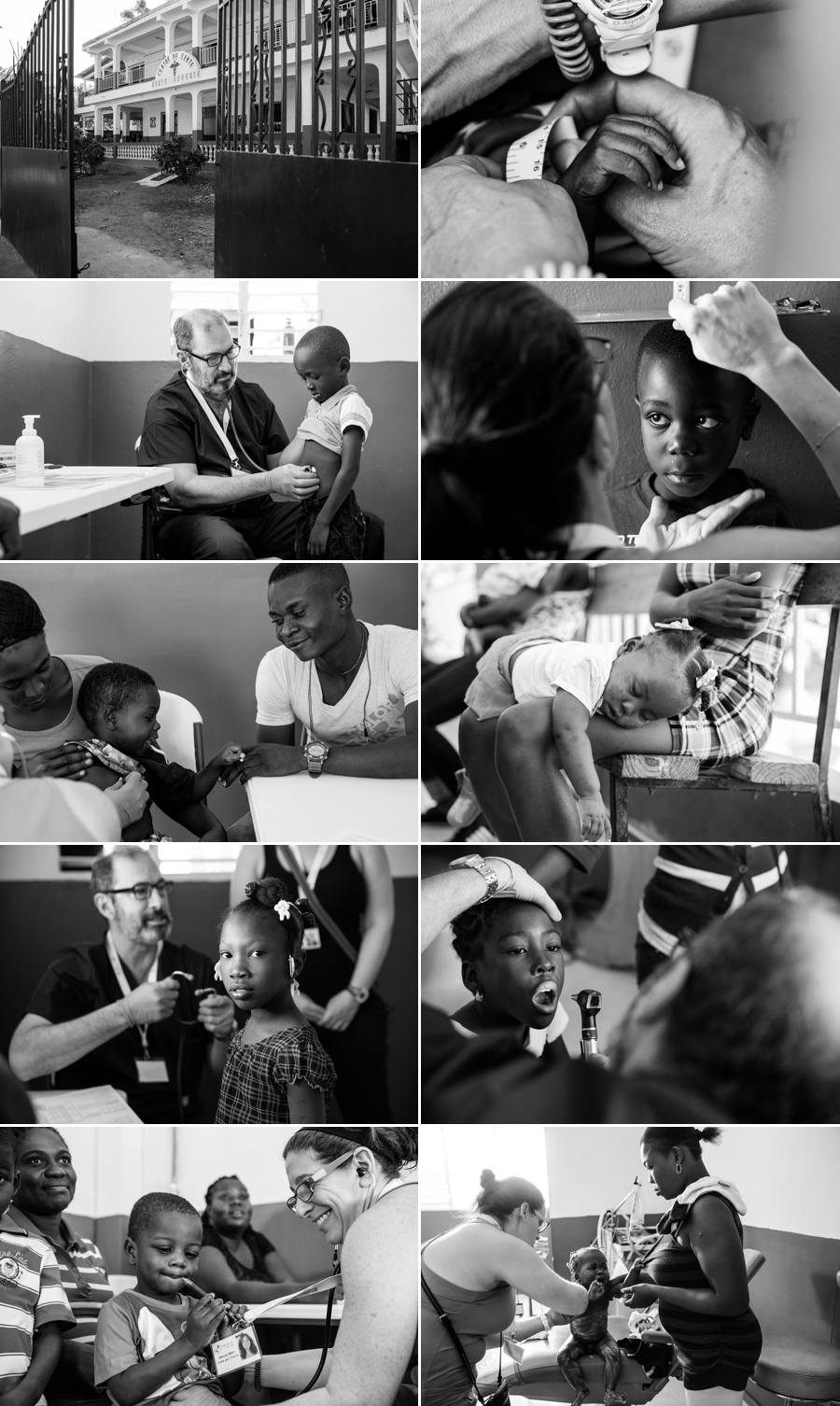 Our third day of clinic was an outreach clinic called Bord de Mer located in Limonade.  When we arrived at Bord de Mer, I was surprised to see we were setting up in an old building with a dirt floor.  The structure was in such rough shape, there were chunks of ceiling falling down throughout the day.  Surprisingly, the team was thrilled to be set up there.  Apparently, the building they used last year was in much worse shape.  I couldn't quite imagine worse than this.  Regardless, the team did their best to use the space efficiently.  They quickly set up five doctor's stations, two triage stations, a waiting area, a lab area and a pharmacy.

The day was busier than the previous two.  And when I finally had a minute to sit in a corner of the lab and look at my work, I found myself with company.  A young boy sat with me and watched me cull and edit my photos.  Although we didn't share a language, he was very clear about which images were his favorite.  This little boy was waiting for a blood test.  When the nurse came in to take his blood, I offered to sit with him and let him look through my images to keep his attention away from the needle.  As the nurse was taking blood, I casually asked about his situation.  It turns out this young boy lost his entire family in the earth quake in 2010.  No one knows what happened to him.  But he ended up in this village (approximately four hours driving north) wandering the streets with burns on his legs and feet.  He was taken in by a woman who hardly had enough to take care of her own children.  But somehow, she had the decency to take care of him as well.  It broke my heart when I heard the boy was being tested for HIV.  I'm thrilled to say the test was negative.

As the day progressed, one of the triage volunteers found she was having a hard time remembering how to tell patients to take off their shoes to be weighed and measured.  She asked one of our interpreters to create a sign to put above the scale.  The interpreter was happy to help.  But, he had to explain it would likely do no good.  Most of her patients (children and adults) would not be able to read.  It's amazing what we take for granted.

We had a chance to take a break for lunch this day.  One of the volunteers pulled out some old racket balls she had brought down to give away.  The children came out of the woodwork to play.  And they were thrilled!  It was fun watching them play and ham it up for the camera.  But I couldn't help notice the village school was right next door and none of these children were in attendance.  The average 25 year old Haitian will have only had 4.9 years of schooling.  Most schools in Haiti require tuition.  It's likely these children's families did not have the money to send them.  You'll see from the images it's also possible they did not have the money to clothe them properly either.  At the end of the day, a woman from the village gathered these children and others to be seen by the doctor.  It turns out they all had ringworm.  But none of them had been seen during the day.  This woman from the village was not the parent of any of these children.  But she knew they needed medical attention.  And while the kids got the medicine they needed, it's hard to say if there is someone at home who will ensure they take the one pill per week for the six weeks required by the prescription.

Our second outreach day was at Jolitrou.  The volunteers were happy to be at an actual clinic with a real pharmacy.  But they still did not have the space needed.  Luckily, it was a beautiful day and triage decided to set up outside.  I was consistently impressed to see the team make lemonade out of lemons.  It was another busy day and the children were visually more malnourished than I'd seen all week.  One poor mother brought her baby in to be seen.  He was so emaciated, the team feared the child would not have made it through the week alive without serious intervention.  I'm so grateful to the Hands Up for Haiti Team.  They made sure the child was taken straight to the hospital and put on an IV.  The baby would be placed in a program specifically created for severely malnourished children.  If you want to check out this wonderful program, take a look at Medika Mamba.  I am sure this program will save that child's life.  I've always known this kind of poverty existed in the world.  But I was not prepared for how I'd feel being face to face with it.  I won't show the photos of how emaciated that poor baby was here.  You may find  them too disturbing.  But if you are interested in donating to that part of the world, please contact me directly to see what kind of poverty exists there.

On our final day of clinic, I thought I had seen it all.  I was not prepared for Shada Clinic.  Shada is located right in Cap-Haitien along the Mapou River.  The river would be absolutely beautiful if it were not strewn with garbage.  In order to get to the clinic itself, you have to jump over the sewage system for the area.  It's basically a deep moat of sewage that separates the street from the sidewalk.  The moat is too wide to step over.  It's definitely a jump.  When we arrived at 8:00am, there was already a large crowd of people waiting to be seen.  One of the first things one would notice, is how well dressed everyone was.  There were little girls in party dresses.  It was not because these people had such great wardrobes.  It was because seeing a doctor is such an important day in their lives, they dress up for the occasion.  There is only one doctor per every 4000 people in Haiti.  And despite being right in the city, Shada seemed to be the poorest area we had visited.

I had seen the team set up in small places before.  But nothing was like Shada.  The entire clinic was basically a large hallway where the team had to set up three doctor's stations, two triage stations and a pharmacy.  Somehow, they found a space for everyone.  What was more jarring, was the noise.  I can't imagine how difficult it was paying attention to your patient with all that commotion around you (I, on the other hand, am used to creating images in the middle of a dance floor at a Jewish wedding.  I was right in my element.).  I really respect the volunteer's focus and determination.  The pharmacy group also had an interesting challenge.  The town's pharmacist had brought her two daughters into work with her that day.  I don't suppose child care is readily available around Shada.  The youngest of the girls spent most of the day crying unless she was being held.  The entire team took turns holding her as they worked.  When the finally got her to take a nap, she ended up on top of the suitcase the team had brought to transport their medications.  It was pretty precious.

Throughout the week, the HUFH team also hosted a few youth groups ranging in topics from nutrition and health to domestic violence and coping skills.  The kids came to learn.  They took notes and asked pointed questions.  They shared personal stories and asked for advice.  They laughed and joked, then got very serious.  One young lady was very worried about getting married.  She wanted a career before she had a family.  And she was concerned her husband would want her to have a family too large and too early for her to have a career.  The legal marriage age for women in Haiti is 15 and girls marry very young.  The official religion of Haiti is Catholicism, so I imagine divorce is frowned upon.  Abortion is illegal.  I could see the volunteers struggle with giving this young girl advice.  What do you do with those kind of odds stacked up against you?

My time in Haiti was both professionally and personally rewarding.  I gained such respect for the strong, smart and caring volunteers who passionately felt an obligation to give back.  And I fell in love with the Haitian people.  I was inspired by their perseverance and determination to make their lives and their country better.  I know I will be back to document and bring back more stories of their lives.  I hope you will find it in your heart to give what you can as well.  For more information on Hands Up for Haiti, please feel free to contact me directly.